STEPS Pathways College students had an exciting day last week when they received a donation from ANZ Business Bank.

ANZ, who have been a long-term partner of STEPS, donated a beehive that houses 4000 native bees to the College’s Caloundra campus.

The beehive has specifically been placed right next to STEPS Nursery, where the bees will pollinate flowers and help produce seeds.

The hive also allows the students to practice more skills, including teamwork and communication while looking after the hive.

“ANZ Business Bank have been working and supporting Carmel and STEPS since 2007 and I thought donating a Hive Haven beehive is something different, providing a number of benefits, being educational, long lasting and providing honey for the STEPS Pathways College and its students,” Senior Relationship Manager at ANZ, Michael Clauson said.

The donation was also made possible by local company Hive Haven, who supplied and installed the beehive at the College.

“The donation of Hive Haven beehive came through a discussion I had with Ann of Hive Haven at a Food and Agribusiness Network function; I thought it would be great to support a local food producer by purchasing a hive and donating to an ANZ client,” Michael shared.

Michael also shared his excitement about the donation, specifically due to the great work that STEPS Pathways College do.

“STEPS were an obvious choice given the incredible support STEPS Pathways College provide to those living with disabilities and learning to live independently,” Michael concluded.

A huge thank you goes to Hive Haven, Food and Agribusiness Network, and ANZ for the kind donation to STEPS Pathways College.

We look forward to sharing many delicious honey related content with you all soon! 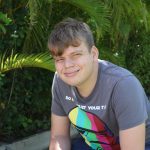