The College that is Changing Lives for Families Living with Disability

By Admin
Posted June 1, 2020
In Uncategorized
The College that is Changing Lives for Families Living with Disability  2020-06-012020-06-01https://www.stepspathways.com.au/wp-content/uploads/steps-pathways-college-logo-200x90-1.pngSTEPS Pathways Collegehttps://www.stepspathways.com.au/wp-content/uploads/045_steps_pathwayscollege_graduationceremony_h2hstudios_sunshinecoastphotographers.jpg200px200px
0
0

The concept of Australia’s first boarding college for young adults with a disability, STEPS Pathways College, was born five years ago. Now in its third year up and running as a college, the students, trainers and parents are reaching milestones, kicking goals and aiming higher than ever before.

The idea was simple, it came from a place that all parents of children with disabilities experience day in, day out – ‘What’s going to happen to my child when I’m not here?

STEPS Group managing director Carmel Crouch, whose 48-year-old son with a disability is still living at home, said for her, this perspective has always been her driving force.

“I always thought there had to be some other way we could make opportunities for young people with disabilities to become independent, however I knew it needed to be done from an early age.

“So, we started STEPS Charity six years ago, with the idea that we would raise the money to build a college, then the community rallied and with their generosity, they built the college for us,” she said.

The Sunshine Coast college, Murphy House, is a modern campus with students residing in shared two-bedroom apartments, with extensive outdoor and recreational zones.

“We’re excited to announce we will have a new expansion built by November this year, to accommodate more students, and we’re looking to expand even further into a ready built complex soon,” Carmel said.

When asked about the college’s major achievements, Carmel noted that seeing the very first cohort graduate last year was a huge milestone.

“Every year more and more students are graduating, and moving on to living independently,” she said.

“But for me, actually the first biggest achievement was that the first cohort of students that came in, were delivered to us by very brave parents, who were the ‘early innovators’, delivering their children to a new program.

“The biggest achievement for me after we got the college started, was to see parents be able to blossom into their ‘new found freedom’, they could get on a plane and go overseas for the first time in 25 years or so, and were able to do the things that parents without children with disabilities, can do all the time.

“I really love to see the freedom that the parents have because they no longer have to spend the rest of their lives worrying so much about their child with a disability, because they’re actually going to be ok,” she said.

To support the next expansion of STEPS Pathways College and for a fun night from the comfort of your own home of ARIA award winning performances and entertainment, buy a ticket to the STEPS Virtual Grand Winter Ball on June 20, www.stepsvirtualgrandwinterball.com.au 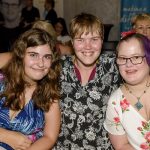